I am beyond satisfied. Exceeded my expectations. High quality,beautiful and mesmerizing. I will definitely be ordering more as soon as they are offered. My hats off to the Aurora company!

My son loves his new plasma glove. It’s super cool. He gives it 5 out of 5 stars. 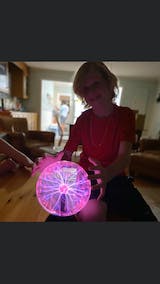 I bought this globe for my 7 year old son who told me that nikola Tesla invented the plasma globe and wanted one really bad. We settled on the Tyrian Purple globe and haven’t been disappointed. The quality is solid, the colors are crisp and the action is great. My only ask is that you let us know when your other color combinations become available again.

J
James N. (Riverside, US)
They just don't make them like they used to

once arrived i picked up the box and thought, did they just ship me styrofoam?? upon inspection and opening, the globe was in perfect condition but extreamly light.. plugged it in and turning the intensity up and down wasnt as smoorh as hoped. max intensity was fine but turning it down makes it blip from low to bursting medium intensity. all I can say is im glad i bought a small one 1st, here i was going to get the BIG one but after seeing and feeling the build quality, no thank you. i just boxed mine up and awaiting to give it to someone as a gift. Dissapointed.

We are sorry to hear that you did not like your globe. It sounds like you reviewed our large professional globes on our site and then mistakenly assumed that you would receive the same functionality and quality in our inexpensive small globes at 1/10th the cost.
Since you have re-packed the globe we suggest that you return it to us for a full refund of the purchase price. Please make sure that the globe is packed exactly the way it was received in the inner and outer cartons to ensure it arrives in unbroken 'As New' condition. We will waive the 20% re-stocking fee but you will have to pay the freight charges. Once we have received the globe in good condition we will issue you a refund. Thank you for your cooperation.

M
Michael N. (Alexandria, US)
A teaching tool and a toy. What more could you want?

I'm always looking to teach my autistic son about the world around him. This plasma ball is a fun way to teach him physics.

We live extremely remote in the wilderness of the great bear rainforest. My kids go to school online and wanted to do a Tesla project for school and conduct some plasma globe experiments. We received our globe and WOW its absolutely fantastic. Its absolutely perfect for their experiments with the adjustable dial. The quality is excellent, the shipping was fast and the colors are incredible. My sons absolutely love it!

Much higher quality than a couple I bought on Amazon. And the wand adds a very cool extra. Good to *finally* have a very good quality plasma globe, with a variable power knob. It also comes with a removable black half globe cover to accentuate the plasma lightning in a less dark room. Definitely recommend. (I probably average one review a year, but when it's a small, high quality company with a top notch product, I try to take a minute and do that.)

Very pleased with the purchase of this globe. For me, it was the standard color and action that I had seen as a child and always wanted one. I was never able to purchase one because something about everyone I looked at seemed off to me and undesirable. The fact that I can adjust the power is a huge benefit and I find that I use this more than I thought I would. To me, it seems very well made for the price. I was glad the power plug had the converter right at the plugin, I hate having the converter halfway down the cord. Obviously, the enjoyment of this globe is best in a darker room, and I currently use mine as a night light and switch it out with others I own. It is very desirable to me to be able to get different types of globes and have them all look the same in style. The packaging was great and shipping was fast. I currently have 3 and hope to get the last 2 when they become available. I do wish I could go lower on the power but I don't think this is from manufacturing but rather a result of the specific gases used in this globe. 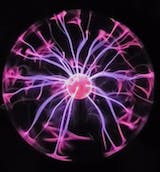