Skip to content
Special Offer: Save 33% on an 8" “Tyrian Purple Special Edition” Globe with purchase of any other type of globe!

Very pleased with the purchase of this globe. I personally love having this globe on a low setting, the color and action is perfect as a night light. The fact that I can adjust the power is a huge benefit and I find that I use this more than I thought I would. To me, it seems very well made for the price. I was glad the power plug had the converter right at the plugin, I hate having the converter halfway down the cord. Obviously, the enjoyment of this globe is best in a darker room, and I switch it out with others I own. It is very desirable to me to be able to get different types of globes and have them all look the same in style. The packaging was great and shipping was fast. I currently have 3 and hope to get the last 2 when they become available. The color is so pronounced as you change the power settings. The power range on this version is perfect goes from a slow peaceful action all the way to a wild crazy dance. Currently, this particular globe has given me the greatest range in action and looks, the variation is enjoyable, and really glad to have this one.

I just wanted to leave a review of my new plasma junior. It's the first one I've had and I absolutely love it! The colors are even better than I was hoping for. A very satisfied customer!!!! These photos really don't do the globe justice, the colors are much more vivid in person. Thanks again for a great product. 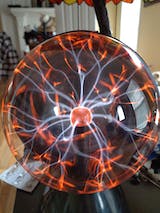 The ball has white arms with reddish tips!

S
S.
Pleased With The Purchase

The Phoenix Rising Junior globe is a really cool plasma lamp. Performs just as described/presented. The order arrived quickly and it was packaged well.

Makes all the alternatives look like the toys they are.

One word - Fantastic! The kids love them, hours of entertainment, way better than youtube kids!

A
A.
Fireworks in a bottle!

Recently bought a Phoenix Jr. and a Genesis Jr. as my first APD globes, and I am absolutely amazed.

The Phoenix rising is a wonderful display of fiery orange and ghostly pale white tendrils. At lower power the orange tips flare out like miniature fireworks, sometimes changing to a flickering display of deep red. The colors In real life are a bit different than on camera, a really unique white i've never seen before, and the tips are more of a pure copper-orange than the reddish on camera, which looks absolutely stunning.
These Jr globes fit perfectly on my shelf next to my other lights, and look incredible. Can't wait to expand my collection!

I was so amazed by these two globes, I bought a big promethean fire and a Tyrian Jr! So excited to see what they look like.

Our “Phoenix Rising” globe is the result of a collaboration we did with one of our customers several years ago. He had called to congratulate us on our efforts, and in speaking with him we found out that he had worked with Bill Parker in the 1970’s on the original plasma globes, and was now a plasma globe collector with over 20 globes in his collection. We convinced him to work on developing something different for us, and the globe you see today is the result of his gas formula.

The Junior version of the “Phoenix Rising” is very true to its older sibling. The combination of whitish tendrils with orange tips is very pleasing, and touching the globe generates bright white lightning strikes and vivid splashes of orange on the glass. The globe has a nice range between the lowest and highest power settings, which isn’t possible with some other effects.

The low setting has a relaxed feel with the orange-tipped tendrils moving slowly and gently. As the power is increased, so too is the intensity of the effects. The tendrils fatten and lengthen as they try to escape the globe. This forces the ends to splash against the glass forming what looks like a swarm of fireflies. Touching the globe draws off bright white streamers to each of your fingers while temporarily calming down the other effects.