By far best plasma globe out there. I have 2 others but aurora stands out from the other 2. It's more brighter and intense. The wand just makes it even better. Looking to get the bigger one in the future. Also have to say aurora replaced my globe FREE OF CHARGE due to a faulty part. It still works but turns off after awhile. 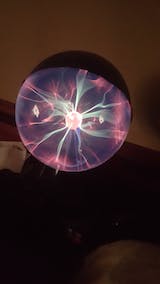 I love my globe! Never get tired of watching and fiddling with this thing. And, the company really stands behind their product with great customer service.

The Junior series globes are great! The plasma effects are just as interesting and varied as my full-size globe, but the low cost allows me to own one of every style! The products and customer service from Aurora have impressed me at every step.

We love this globe. The color, clarity and adjustable intensity is perfect. I owned a similar globe as a teenager (bought from Spencer Gifts at the mall in the 80s) and always regretted “growing up” and giving it away. Fast-forward 30 years, not only is this globe better, it’s also almost $30 cheaper!

Along with our raves about the globe, I’d also like to thank everyone at Aurora for their fantastic customer service. We had an issue with one of our globes (we’ve bought three so far), and they were VERY responsive to the initial email, but then also followed up by phone and the replacement part was shipped the same day (with tracking emailed same day). Class act customer service. Thank you for the awesome products and great customer service.

PS: I bought a museum-sized version of this globe a LONG time ago from Aurora. It has been run 8 hours per day, 5 days per week, for almost 15 YEARS and still runs like a champ.

Wow - Amazing! I have the full size Emerald Fury, and the kids love sitting in the dark for hours watching it in the man cave… Now they have their own globe, honestly I’m jealous, the Genesis is mesmerizing to watch!

One word - Fantastic! The kids love them, hours of entertainment, way better than youtube kids!

Not like cheap examples - you see at Spencer Gifts, etc. You have four models to choose from and the price is worth it.

L
L.M.
The best customer service I’ve ever had👍

It’s is very rare that a company will contact you to let you know there is a problem with a product, but that is exactly what happened when we ordered this globe 🌏. They let us know that a part was defective and that they would be sending us a brand new one and to keep the old one that may or may not stop working. My family and I have already started saving to get one of the large globes because they are just awesome. Can’t wait until that day is here. But for now these will do just fine! 👍🤘👌🤝👏