High quality. Worth the extra money.

Once Jerry told me the Pro Series was coming, I was willing to wait almost an entire year to get my hands on one of them!! I was already a fan of APD and their products, and I had already decided where I was getting my plasma globe from!! I can't describe how excited I was to get that email near Xmas that the Junior Pro's were ready to go!! I just received my 8" Genesis version this week, and it's every bit of perfect and exactly as he had promised!! Improved base, Laboratory Glass, and the same gas mixture as the 15" versions!! As soon as it arrived I already had the display area prepared, and set it up immediately!! It's absolutely perfect!! The green/red tendrils are stupendous, and the white'ish blue tendril reactions to touch are icing on the cake!! I picked up a Plasma Wand too and it simply adds another level of cool factor to the entire package!! I proudly turn it on every evening, and just can't stop turning around to enjoy watching it!! If you're looking for a quality item to be proud of...Aurora Plasma Design all day!! Saving up for a 15" now!! Thank you Jerry...I couldn't be happier!! :) \m/\m/

I've had the large Genesis for awhile, love it! The smaller Jr model is as beautiful as the original, but in a smaller package. It's great.

Bought this for my brother for Christmas gift. Works and looks great! Well worth the price. The build quality is excellent, and the amount you can vary the effects from barely one streamer to many, along with the density of the streamers at max power, is amazing. Overall: A+

I received a Genesis Junior Pro as a Christmas gift and it is hands down my favorite gift. I can't stop looking at it. I will definitely be purchasing another one for my office. 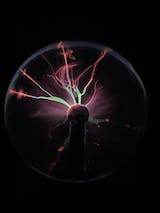 I bought a Genesis Junior Pro globe for each of my two sets of grandchildren this Christmas. The globes are wonderfully well made and operate just as shown in the demonstration videos. Besides their being an artistic tour de force, the globes gave us a chance to talk about plasma being the fourth state of matter and to discuss how lightning works and why thunderstorms can leave a fresh smell in the air. Congratulations to Aurora Plasma Design for making a superb product!

Our “Phoenix Rising” globe is the result of a collaboration we did with one of our customers several years ago. He had called to congratulate us on our efforts, and in speaking with him we found out that he had worked with Bill Parker in the 1970’s on the original plasma globes, and was now a plasma globe collector with over 20 globes in his collection. We convinced him to work on developing something different for us, and the globe you see today is the result of his gas formula.

The Junior version of the “Phoenix Rising” is very true to its older sibling. The combination of whitish tendrils with orange tips is very pleasing, and touching the globe generates bright white lightning strikes and vivid splashes of orange on the glass. The globe has a nice range between the lowest and highest power settings, which isn’t possible with some other effects.

The low setting has a relaxed feel with the orange-tipped tendrils moving slowly and gently. As the power is increased, so too is the intensity of the effects. The tendrils fatten and lengthen as they try to escape the globe. This forces the ends to splash against the glass forming what looks like a swarm of fireflies. Touching the globe draws off bright white streamers to each of your fingers while temporarily calming down the other effects.