A final note: although we recommend only running your globe while you are around to enjoy it, we have been running several samples of our Junior globes 24/7 for a few months now to prove their longevity, and will continue to run them. Your “Junior Series” globe comes with a limited 90 day warranty exchange period for any globe that fails under normal household usage.

Our plasma globes are made from temperature-hardened, laboratory-strength blown glass. Because the glass is hand blown, it is normal for it to have some imperfections. Upon close inspection, you may find small bubbles in the glass or minor scuffs. These imperfections will be completely invisible under normal operating conditions (i.e. a darkened room).

You definitely get your money's worth. These plasma globes both the large museum sized and the JR. Sized are a spectacular works of electric plasma art. Very HIGH QUALITY. 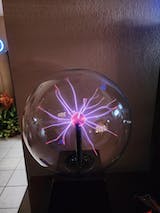 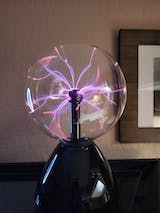 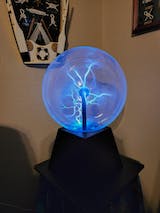 I received the Tyrian Purple JR plasma globe. 1st I love that it was packed very well and very simple (( no styrofoam peanuts )). Second THE QUALITY of the product and simplicity of operation. To first turn it on you see a streamer or 2 and a beautiful purple aurora to mid level a very nice purple plasma display to full on power an all out imence beutifull purple electrical storm. Wonderful product 👌 quality product and worth EVERY cent Paid 👌 ✨️ 👏 👍

J
Jared B. (Memphis, US)
Amazing gift for daughter!

Daughter is thrilled and mesmerized with this! I really appreciate the included pamphlet with history of plasma globes and safety instructions. Will order another one sometime later for sure.

Very Beautiful! You just can't go wrong with any globe from Aurora Plasma Design! Thanks again!

After reading all of the cheap Amazon plasma globe 'exploding' reviews, we had to find a better product. I found this Junior Pro on the Aurora website (the store shows out of stock, but they had some on a separate page?).
This is so well made, I have no worries about exploding, short life span, being too dim, all the rest. This is a top quality home plasma globe and the family loves it.

Such good quality. Construction, color, overall awesome. This is not one of those toys you find on Amazon or in Spencers. I'm psyched they came out with the Junior Pro series because my Wife would be pissed if I spent $2500 on one of these b4 we bought a house...and I totally would! =P