Feel the Lightning in the Air with a “Magic Plasma Wand!”

Plasma globes are filled with dazzling effects, but most people don’t realize there is a lot of invisible but safe energy emanating well beyond the globe’s interior. We are very excited to be introducing our inexpensive “Magic Plasma Wands” that can reveal the unseen!

Note: Typical consumer plasma globes have less power than Aurora Plasma Design globes, and as such may not generate enough of an electrical field to illuminate these wands. We can only guarantee that our wands will work with globes sold by us.

The Magic “Plasma Orb” Wand is 16 inches long and capped by a ping pong ball sized bubble. The tough borosilicate glass is filled with pure neon gas whose effect is best described by its co-discoverer Morris Travers in 1894. ”The blaze of crimson light from the tube told its own story, and it was a sight to dwell upon and never to forget...for nothing in the world gave a glow such as we had seen.” This amazing phenomenon is now available through the use of your Aurora Plasma Design globe and a Magic “Plasma Orb” Wand.

Through the principle of induction, the wand will respond to the electrical fields of both the “Museum Series” and “Junior Series” globes, giving off an intense reddish-orange glow that varies in intensity and saturation as you handle the wand. Our 15-inch globes can activate the wands when they are still several inches from the globe, while the 8-inch globes may require that you touch the wand to the globe to get the gas to ignite. From here it is up to you to create many different effects!

Note: Our Plasma Pearl wands only work well with our “Museum Series” globes. Our “Junior Series” globes do not emit enough power outside the glass to reliably illuminate the “Plasma Pearl” wands.

The Magic “Plasma Pearl” Wands behave in much the same way as the Magic “Plasma Orb” Wand, but have the added feature of rolling glass beads that reposition themselves as the wand is moved around. The glass beads interact with the gasses inside the wand, forcing the plasma current to wind and twist between the crevasses. If you turn the wand around as it is illuminated, the beads will also catch the light of the plasma stream and sparkle like fireflies.

The “Plasma Pearl” wands come in two different colors due to the different gases used to fill them. Your choice of which color is best in your situation will depend on the particular color of the globe you own. We suggest that a contrasting color is more striking, but this is a personal preference matter.

Moving the wand towards the globe will light up the wand and create bright pathways of plasma streamers through the glass beads. Rotating the wand with your fingers also shifts the glass beads and the path of the plasma. The effects will follow your fingers as they move up and down the shaft. The video shows but a small portion of the endless effects that can be created.

Because of the added electrical resistance of the glass beads, the “Plasma Pearl” wands are slightly harder to illuminate than the “Plasma Orb” wand. With our “Junior Series” globes, you may need to touch the wand to the glass initially to get the plasma to ignite. Similarly, with our “Museum Series” globes, you will need to bring the wand closer to the globe before it will ignite. You will also find that the “Plasma Pearl” wand is easier to ignite if the empty part of the wand is closest to your globe. You can then “draw” the plasma down through the beads with your fingers.

All of our globes and wands are made from very strong borosilicate glass, but even so, glass is glass, and thus they are not unbreakable. Our large professional globes are made from very thick glass and it is very unlikely that you could break the glass with a wand, but you can scratch it. Care should be taken when the two glass objects are touching each other. If you do touch the two together, make sure to do so gently.

The Magic Wands are made from thicker glass than the “Junior Series” globes and we expect that the globe would be the first to break in a sharp collision between the two. Please keep in mind that even though our “Junior Series” globes may find their way into the hands of younger plasma art enthusiasts, they are not toys! Children do not have the same coordination and motor skills as adults, and can possibly damage the wands and globes with their unbridled enthusiasm. The results of breakage pose no greater danger than that from a dropped glass of milk, but adult supervision is strongly advised to prevent any accidents from happening.

Capacitive field sensors are generally Interesting demos for kids, they stimulate wonder and questions about the science.

The first one broke in shipping, but it was replaced as soon as I notified Aurora Plasma Design with photos. It's the coolest gadget! It works as advertised, and it's a fun way to interact with the globe, and it has more design aesthetic than an old fluorescent light bulb. I'd recommend picking one up, they aren't expensive, and they are super cool! 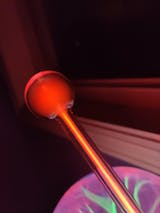 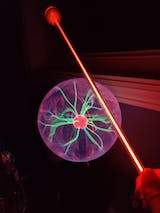 We are using the wand as an educational product, and it is truly fascinating! Shipping was also fast. Overall, very satisfied!

These are amazing. When not being held i place mine in a vase between displays and lean it near the globe to add interesting lines to the overall display. Of course i had to order one more to point to the left to keep things symmetrical! Pictured leaning towards the beautiful Genesis Junior Pro. Thanks!

Two of the three wands work well, but one isn't easy to make react. With the globe at full power, you can move it all around to maybe have it light up.

A
Alfred S. (New York, US)
It is so different

Also I got the Plasma Pearl (Lava Flow). This idea to add glass beads in the rod was really cool because it gives you a sense of the physicality of the phenomenon inside. Thanks for making these products, I am very happy.