Skip the cheap ones on Amazon; Aurora's got the best globes online. Probably buy a Promethean Fury when they become available again. 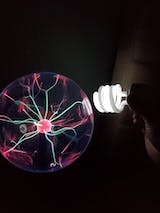 I’m impressed. I have the Genesis Jr. and the Tyrian Purple Jr. They both are striking (Lol). One in the office and one in the living room. I lose about 45 minutes a day adjusting the power and watching how it shifts colors. Next is the Emeral Fury Museum! 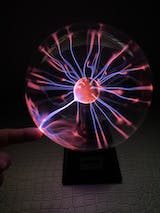 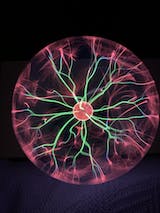 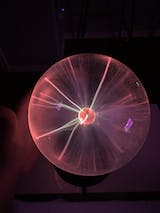 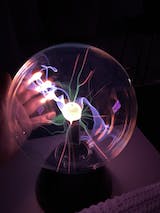 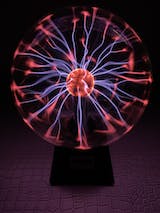 I wanted a plasma globe colorful enough and bright enough to impress anyone who sees it. I believe I made the exact right choice! Amazingly beautiful and dazzling.

I was concerned that a “Junior” globe might be too small, but it’s actually the perfect size to display in my den on an end table. The quality of materials and construction is much better than cheaper globes I looked at on Amazon. I’m very happy with this purchase.

I purchased one of these after speaking to the owner himself over the phone. I called in to ask some questions and was thoroughly impressed with the level of passion and care that goes on behind the scenes.

As for the plasma ball itself, the glass is crystal clear and the base seems very sturdy. Comes with a wall plug and wire and has a knob to adjust power, very standard. Now, let's talk about the fun stuff. When I turned it on for the first time I was immediately blown away. I've had smaller plasma balls before, but nothing quite like this. On the lowest setting, you get these consistent thin 'lines' (not sure what the technical term is) of plasma that are evenly spaced out and dance around quite a bit. On the medium setting the lines of plasma get a little thicker and move erratically around the ball, not dancing too wildly, yet. The higher you go, the more lines you see and the more they dance around. The highest setting is something to behold though; the entire ball lights up with wild lines of plasma going all over the place, very erratically. It's absolutely stunning to see.

I got the Genesis Junior, so the plasma colour is predominantly green/teal with the ends touching the glass turning into pink/purple. The colours are very vibrant, especially on the highest setting.

I hope my description did the ball justice. The pictures posted are pretty much exactly what you get. You need an entirely pitch black room to get the most out of it though. Not worth keeping it on in day light/bright light settings.

After speaking to the owner, I bought the ball that same day. It arrived within a week. Best 'fun' purchase I've made this year.

L
Lance M. (Piermont, US)
Love it, the Genesis Junior colors are amazing!

I have always wanted a plasma ball and wanted to get a quality one, well II found it.
Great customer service. If your thinking you want one just go for it you will love it.
I may have to step up and get one of the large ones soon.

got this globe as my first APD globe and it is a beauty!! the colors are bright and the effect is really pretty. the red tips are ever so slightly purple/magenta which is a really nice contrast to the vivid green. and the blue-white streamers hitting your fingertips are fantastic!
one suggestion i could make is maybe adding some rubber feet or the like on the base, they tend to slide quite easily on a smooth shelf. not a complaint or anything, just a suggestion. Otherwise an amazing desktop globe, and I hope to get a big Genesis soon!
(Assuming i don't run out of shelf space....)

Of all our globes, the ”Genesis” series has long been our favorite. With its hues of green, orange, blue and hints of purple, it is easily our most colorful globe. It also strikes a nice balance midway between the slow and relaxed “Tyrian Purple” globes, and the frantic speed-crazed “Emerald Fury.” If you are looking to give a plasma globe as a gift, the “Genesis Junior” globe is a great choice for someone who has only ever seen a regular mass market globe.

Because of the complexity of this effect, we had our doubts that we could be successful in creating a downsized version of the “Genesis” globe, but the Junior version has wildly exceeded our expectations. What the “Genesis Junior” gives up in size, it compensates for by producing color saturation that is more intense than our large professional model.

Starting on the lowest power setting, vibrant green tendrils emanate from the soft orange glow of the center electrode. They are tipped in a nice orange color and wave slowly back and forth in the vacuum. As the power is increased the tendrils multiply and lengthen. Approaching full power increases the speed of the effects and starts to reveal violet tinted white tendrils here and there. A hand or fingers placed on the globe at this point generates very striking white streamers against the contrasting deep green and orange effects. The effect is stunning and you will catch glimpses of fluorescent blue reflected in the glass wall.

As extraordinary as the interactive “Genesis Junior” effects are at high power, we really love this globe on the lowest power setting. Being able to dial it in and watch the slowly swaying Green and Orange light show is a pleasure not to be missed.